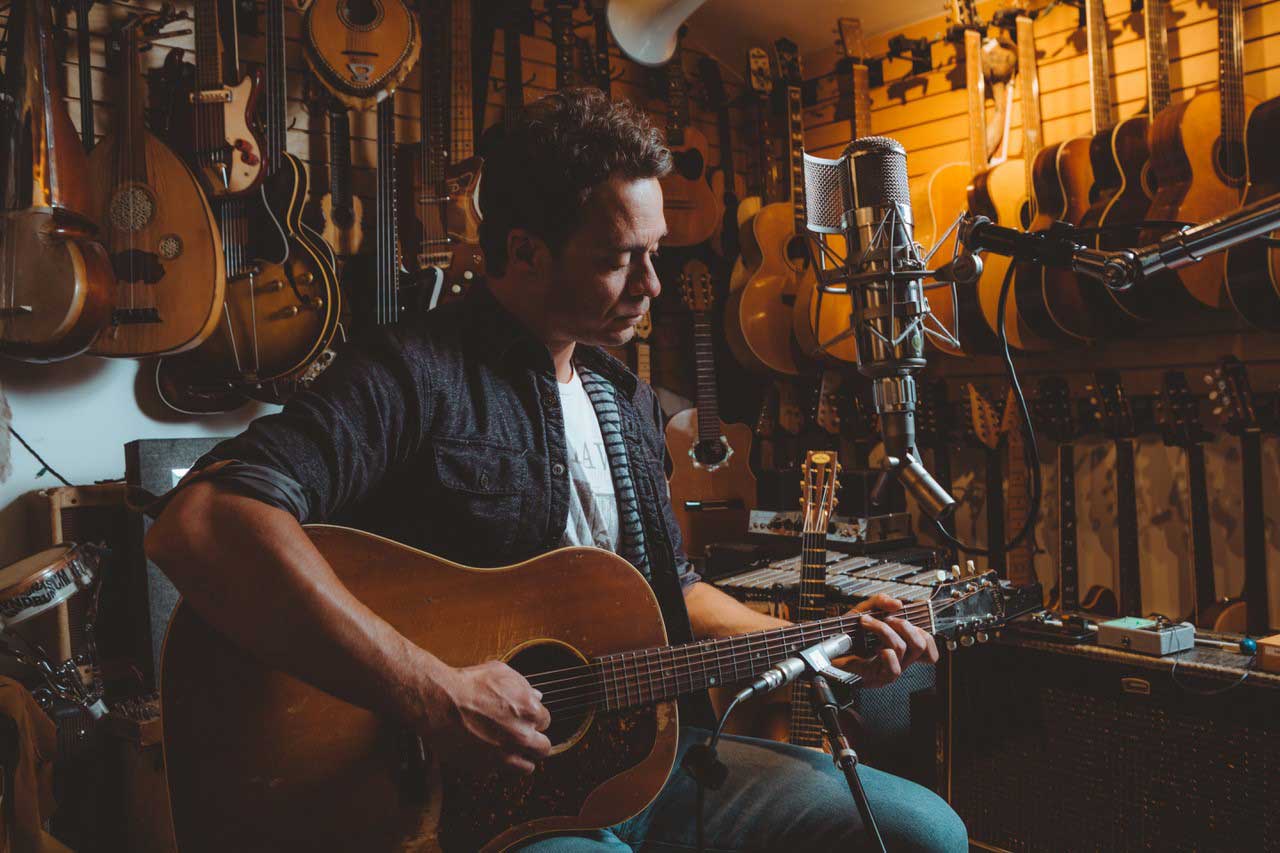 With MY NEW MOON, his seventh album, Amos Lee reaches into experiences of hope, hopelessness, loss, and renewal. The result is the most wide-ranging musical effort of his career, a set of songs that examines issues of mortality, survival, connection, and celebration in ways that are both deeply personal and profoundly universal.

In 2007, the singer-songwriter began working with the Musicians on Call program, playing music bedside for hospital patients. He went on to play at VA hospitals, for the Wounded Warriors organization, and for the Melodic Caring Project, singing via video for children who are quarantined, too ill to have friends or family visit in their rooms.

“Everything about the connection of music hit me harder,” he says of these efforts, “and I thought, ‘How can I be helpful, and reach out in a more real way?’ Songs have become a bridge, a way for me to reach outside myself and into other people’s lives. My mission now is to connect with people, to still have fun, but to have my intention be more outwardly based, and from a place of giving and service.”

More recently, Lee suffered a difficult loss of his own. “My grandmother, who was the matriarch of our very large family, and the love centerpiece in all of our gathering, got really sick, and very suddenly passed away,” he says. “She showed love in the small ways—in how she smiled at you when you walked in her front door, how she made a piece of buttered toast a delicacy, how she spoke with such warmth and familiarity to her mailman. In all deeds, she was graceful and beautiful and kind. So her falling ill so quickly and violently hit us all hard.

“At one point during her last night,” he continues, “it was just her and me in the room. The rest of the family left, because the doctor told my mother and me that they thought she was stable, but then something went wrong, and she started to fade very quickly. It was around 4:30 in the morning, she was fighting for breath, sweating, and fighting for her life. I stood with her, and held her hand, hoping that she could hear me. I felt totally helpless, and while I wiped away the sweat from her forehead, and words all felt worthless, I started to sing to her. I sang ‘Somewhere Over the Rainbow’ ‘What a Wonderful World,’ and my grandfather’s favorite song, ‘Born to Lose.’ She looked up at me and smiled a faint smile before she drifted into her final sleep. A couple of the overnight nurses were standing in the doorway, and in a very tragic moment, we all shared a breath. It’s in these moments that I realize how sacred music is, and how the world, which seems in such disarray, can find simple solace and connection in the light of song.”

This incident informs much of MY NEW MOON; Lee points particularly to the tracks “All You Got is a Song” and “Hang On, Hang On.” But, he points out, the album is as much about other people’s stories as it is his own. “All this work in the last decade comes to the fore,” he says. “I know many people who have experienced tragedy, and whether it be a friend, or a friend’s child, or a fan I meet at a coffee shop who shares their story with me, I take them all to heart. I want to connect, and to be open to those who have hardship, so that that they know I hear their stories in the same way that they hear mine, and that we’re in this together. I don’t want to overwhelm the listener with sorrow, but I am inspired by these friends and families, and want to help their light find shape.”

Much of Lee’s recent work bore the stamp of strong producers—Joey Burns of Calexico on 2011’s Mission Bell (which debuted at Number One on the Billboard 200, Amazon, and iTunes charts, and spun off a hit single with “Windows are Rolled Down”) and Jay Joyce (Little Big Town, Eric Church, Cage the Elephant) on 2013’s Mountains of Sorrow, Rivers of Song. But for his last album, 2016’s Spirit, Lee took over the helm.

“Producing my last album was cool, and I’m very grateful for the opportunity,” he says, “but after I did it, I realized that I had a lot to learn, and that I wanted to focus my energy on my performances, and on the songwriting. For this album, I wanted to open up, and push myself to collaborate with someone who was passionate and creative and could really partner with me to elevate the album from a sonic and musical standpoint.”

For the new album, Lee turned to producer Tony Berg, who has worked with everyone from Public Image Ltd to Peter Gabriel, and moved operations to Berg’s Zeitgeist Studio in Los Angeles. Such notable musicians as keyboardist Benmont Tench; drummers Matt Chamberlain and Chris Dave; and multi-instrumentalists Blake Mills, Ethan Gruska, and Jaron Olevsky all participated in the sessions.

“I’m trying to grow as a musician, and to put myself around people who are better than me,” says Lee. “I really don’t speak the technical or theory-based language of music, and there are times in the rendering of an arrangement that those skills are extremely vital. Tony was great at that. He has a very unique and progressive interest in harmony, and a childlike wonder and energy coupled with a lifetime of experience. He’s a big-hearted man, and he really helped me explore realms that I didn’t quite know how to reach. His ideology is, ‘Let’s go further left than we want and see what happens.’ “

Lee came in with fifty songs to consider, but knew that there were a few that were key to the project. “A lot of this starts with the song ‘Little Light,’ which is the story of a family I grew close with whose daughter had very serious cancer,” he says. “She’s a beautiful kid who was suffering a lot, and sometimes she and her dad would FaceTime me from her hospital room, while she was going through chemo, and I would sing to her. I wanted to write her something with hope, and to remind her that she was awesome.”

“Don’t Fade Away” was written for a friend whose child passed (“I was trying to embody something he may have felt, or maybe how I might have felt in that situation”), while “Whiskey on Ice” was inspired by the unexpected death of another friend. “It’s a tribute to his mother,” says Lee, “trying to walk down the hallway with her in the middle of the night and feel what she feels.”

Much of the material on MY NEW MOON was altered dramatically during the recording process. “We broke these songs apart and put them back together,” says Lee. “The first track—‘No More Darkness, No More Light’—was originally titled differently, and had none of these same lyrics. We put in one musical element, then rebuilt the whole idea around that, then scrapped that and worked on the layers that we had created. Then I rewrote the song with a lyric more appropriate for where the song was now musically. It was frustrating and teeth-gnashing, but I’m up for the challenge. I learned a lot and grew a lot, but it took a lot of slow-motion movement to ease into it.” (Lee notes that “Hang On, Hang On” is the album’s only song that is acoustic guitar-based; “for everything else, there was a better idea.”)

This sense of digging deeper, of fearlessly bringing out the real essence of a song’s meaning, lies at the very heart of MY NEW MOON. “In these days of political crisis, I do think there’s also this feeling that there could be renewal,” says Amos Lee. “That’s what the title of the record is about—a seemingly utter darkness that’s also a beginning. I know that the times I’ve grown the most have been in times of crisis, when I wasn’t sure who I was.

“In listening, and trying to connect to someone else’s pain or someone else’s victories, there’s a lot of fertile ground to be found. Just a beginning, a simple place to start. A conversation, a song, to see and feel someone else’s humanity in your own. That’s always been my interest; sometimes I get there and often I don’t, but I hope in these songs, someone finds a place to start.”