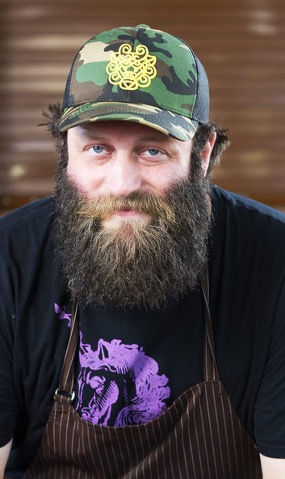 Bob Cook’s career in the kitchen began at age 14 when he started working at a local country club in his home state of Michigan. The chefs around him recognized the quality of his work and solid work ethic, and by age 17 he became a sous chef. His passion continues to carry him through his 20+ year career in the industry, with experience and interest spanning cuisines, styles, and locations.
Website Facebook @EdmundsOast edmundsoast

Bob worked in Michigan for 11 years before moving to work at Morton’s in St. Louis. He owes much of his growth to all that he learned both inside and outside the kitchen. He relocated to Charleston in 2007, drawn in by the up and coming food scene and close proximity to the water. He spent 10 years working with Cypress and opened Artisan Meat Share before moving to Edmund’s Oast in 2017.

Alongside his passion for the industry, Bob enjoys Asian cuisine, collecting whiskey, growing hot peppers, and anything fermented and bubbly. Oh, and an inexhaustible love for condiments, solidified by the creation of Burnt & Salty, a collection of Korean mustards and glazes. He is, in fact, a cat person, although admittedly doesn’t quite understand why.

Edmund’s Oast is a restaurant like no other because it’s so much more – a unique combination of brewery, seasonally-focused kitchen, and encyclopedic bar program. Scott Shor had the vision to bring these often-singular pursuits under one roof without sacrificing an inch of quality among them. The restaurant offers an elevated but approachable menu, providing guests a warm and exciting dining experience. Executive Chef Bob Cook’s distinctively dynamic menu includes bar snacks, house-made charcuterie, small plates, heartier entrees, and classic desserts with a contemporary spin. The food is authentic without pretention, delivering an extraordinary dining experience inspired by the beverages featured on the menu.