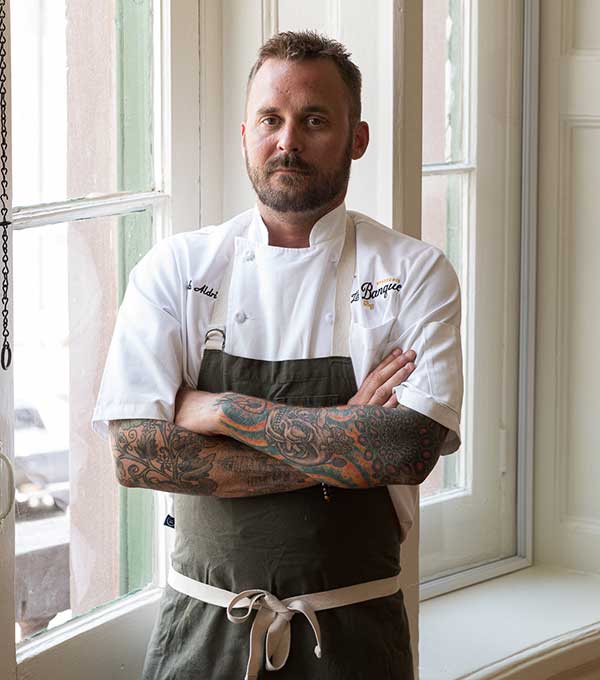 Jeb Aldrich is the Executive Chef at Charleston’s classic French restaurant, Brasserie la Banque. Aldrich, whose father is a celebrated chef in Atlanta, GA, always knew that the restaurant industry was his calling. At age 16, he started washing dishes at a local restaurant in his hometown of Baltimore, MD; and just a few years later, he traded his views of the Chesapeake Bay for the Charleston Harbor, where he enrolled in the culinary arts program at Johnson & Wales University.

During his time at culinary school, Aldrich landed a position at the renowned Peninsula Grill, where he served as Chef de Partie alongside budding industry peers Sean Brock and now Indigo Road restauranteur, Steve Palmer. Following graduation, Aldrich moved to Atlanta and worked under esteemed Chef Carvel Grant Gould at Canoe, where he sharpened his culinary skillset and quickly gained invaluable experience. In 2006, he accepted the position of Chef de Partie with Joël Antunes at his eponymous restaurant Joël. From Antunes, Aldrich went on to work at various properties abroad in both Austria and Italy, before moving back to Atlanta to work alongside his father at 4th & Swift. Most recently, Aldrich served as Executive Chef for Tiny Lou’s restaurant, located within Atlanta’s popular Hotel Clermont.

Aldrich’s return to Charleston feels much like a homecoming, and he excited for the opportunity to open the city’s first authentic French brasserie. Here, the menu will center around classic and comfortable traditional French dishes in an elegant and refined neighborhood setting. For Aldrich, success to him is a room full of happy and smiling customers, a goal that he works tirelessly toward each and every day.

When he’s not at the restaurant, Aldrich enjoys spending his spare time golfing and fishing along the Carolina coast.