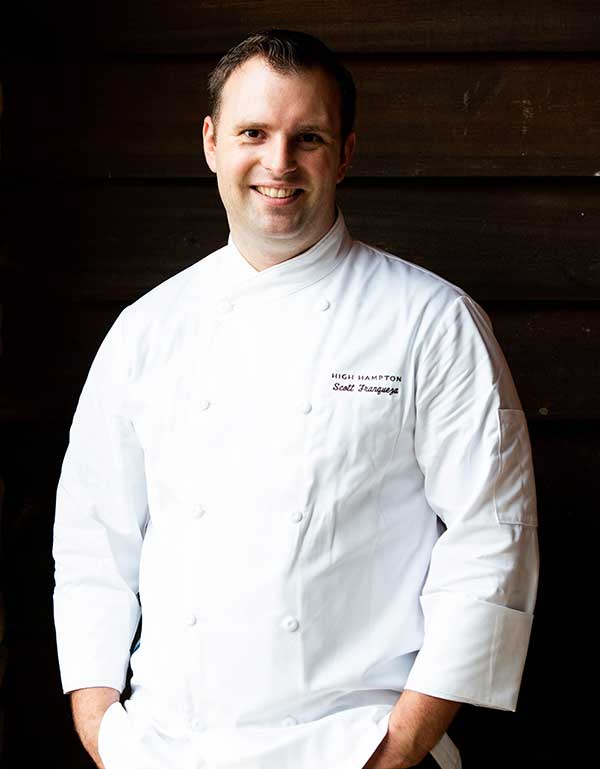 Growing up in Massachusetts, Scott was introduced to the joys of cooking by his grandmother who looked after him in his younger years while both of his parents were at work. Daily sit-down dinners of big salads and homemade dishes gave him an early taste and appreciation of the culinary world.

Inspired by his parents, who imparted a strong and loyal work ethic in him, Scott sought out an after-school job in high school, which changed his life’s career path forever. Starting as a bus boy at Parthenon Pizzeria, a local pizza shop in his New England hometown, Scott worked his way from dishwasher to cook, which catapulted his culinary career.

From there, Scott decided to attend the famed Culinary Institute of America in Hyde Park, NY, which reinforced his passion for cooking. Here, he was also introduced to April Franqueza, his now-wife and High Hampton pastry chef. Together, they embarked on a culinary journey, which eventually took them both to Blackberry Mountain in Walland, TN. Prior to the move down south, Scott honed his skills in some of the country’s most prestigious kitchens, including Per Se and Café Boulud in New York City and Benu, Saison and Coi in San Francisco.

Hard work, intense discipline, and teamwork are Scott’s favorite aspects of working in the culinary industry. Recently joining the High Hampton team from Blackberry Mountain, where he was sous chef at Three Sisters restaurant, Scott enjoys hunting and fishing, and looks forward to spending time in the beautiful North Carolina mountains with his wife April and dog, Pepper.