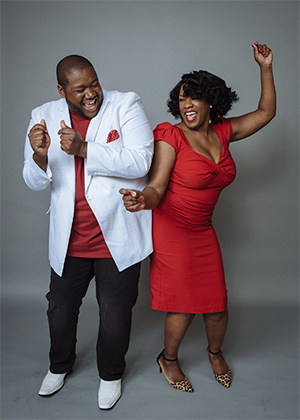 The War and Treaty

When it comes to making music with both extraordinary passion and exceptional chops, few acts today can surpass the sheer excellence of The War And Treaty. Newly signed to Rounder Records—and named the 2019 Emerging Act of the Year by Americana Music Association—the husband-and-wife team of Michael Trotter Jr. and Tanya Blount-Trotter deliver a dynamic sound that joyfully blends Southern soul with elements of gospel, country, rock-and-roll, and blues. Also known for their phenomenal live show, the Nashville-based duo are now gearing up to make their Rounder debut with a sophomore album showcasing their boundless energy and tremendous generosity as songwriters and performers.

Despite the deep sense of communion that infuses their music, Michael and Tanya hail from wildly different backgrounds. Originally from just outside Washington, D.C., Tanya discovered her supreme vocal skills at a young age and promptly pursued a career in music and acting. Meanwhile, Michael grew up in Cleveland and D.C., spending part of his childhood in homeless shelters and later enlisting in the U.S. Army. While stationed in one of Saddam Hussein’s palaces several years after 9/11, he gained access to a piano and quickly captivated his fellow troops with his powerful vocal presence. Soon tasked with writing and performing songs in memoriam to his unit’s fallen soldiers, Michael cultivated a distinct songwriting voice that he further developed upon returning home. After he and Tanya shared the stage at a music festival, the two began creating music together, eventually marrying and forming The War And Treaty. Their EP Down to the River arrived in July 2017, and the duo made their full-length debut with Healing Tide—a widely acclaimed effort. The Associated Press called them, “…a powerhouse R&B duo who sound as though they were born to sing together,” while Billboard went on to claim that, “The music world…has definitely shown that it’s ready to love The War and Treaty.”

The War And Treaty have shared two new tracks from their forthcoming album that bring even more depth and dimension to their music. With its spellbinding intensity, “Jealousy” unfolds in a masterfully orchestrated sound that merges soaring harmonies and kinetic beats, symphonic strings and scorching guitar work. And on “Hustlin’,” cascading piano tones and gently lilting rhythms build a beautiful contrast to the song’s moody meditation on perseverance and grit. Along with completing the follow-up to Healing Tide, The War And Treaty spent much of 2019 touring with the likes of Brandi Carlile and Jason Isbell, as well as joining the legendary Al Green for a run of dates at such iconic venues as Radio City Music Hall.